Before the skiing segment of the Austrailia trip, my mom, dad and I spent a few days in Melbourne. Australia is in the UTC+10 timezone, which is 16 hours ahead of Colorado. However, we viewed our day as being six hours behind that of MST, just on the next day. I personally have a harder time travelling West than East, and had trouble staying awake past 7:30 on our first night.
The next day, we rode the public tram through Melbourne just to get a feel for the city. We walked by the Yarra River, stopped in a vintage clothing shop and visited the Australian Centre for the Moving Image - a free interactive film museum. ACMI had the history of televisions and movies along with many exhibits, including one for virtual reality. I was glad to have been in South Africa a week before, as both locations had cold winter conditions.
After a jetlag induced nap in our hotel room, my family went to the Queen Victoria Night Market. We talked to some of the locals at the event, who explained some differences between the day and night market. Generally, the day market had more retail shopping booths scattered with some restaurant locations, but the entire area was far more spread out. The night market was more of a social gathering crowded with other people. All of the booths were under a massive pavilion area. One side of the pavilion had live music while the other had a fire eating performer. The majority of the stands sold food with a few retail shops scattered throughout the area. These sold more unique products, like lighted balloons, wood carvings and dream catchers, whereas the day market sold every day items like towels or grocery fruit and vegetables. During our stay we made a visit to the day market as well. 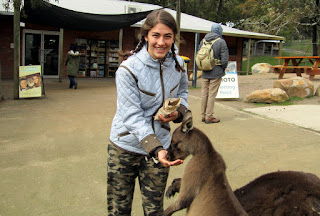 My family and I also travelled to an interactive Australian wild life preserve. Australia has an extremely unique ecosystem containing marsupial species found only on its island so most of the animals at the preserve I had never seen before. That night we visited the Chinatown segment of Melbourne and the next day we met the rest of the ski group, consisting of five boys, four girls (myself included) and two coaches.
Our first ski resort destination was Falls Creek. We drove for six hours mainly uphill, and it was as if we travelled through several continents. The first segment of the drive was in an empty arid desert that was fairly warm. Next, we passed through eucalyptus forests that were humid and remnant of a rainforest. Finally, we reached the snowy roads leading up to the mountain. We checked into our apartment- which was conveniently located on the mountain for skiing in and out.
There isnâ€™t much of a town surrounding Falls Creek, mainly hotels and restaurants. I was therefore surprised to learn that my dad has a friend who lives at the resort year round- Steve Lee- another ex racer, who is one of two Australian men to ever win a skiing world cup race. Steve picked my dad and I up for dinner at his house one night, on a snowmobile towing a bench behind him. This was the most efficient way to travel across the resort as all the roads were below the town, and the paths between the buildings were under 3-4 feet of snow.
The weather was variable in Falls Creek, it sometimes got very foggy, but we had five solid days of training with two slalom races. At these races, we had one personal best score, which means that one of our athletes scored their lowest FIS point result ever (counter-intuitively, the lower points the better).
The next race series was at Mount Hotham, also in Australia. This time our group stayed off the mountain, in a town called Dinner Plain, about a 20 minute drive away. The races at Hotham were part of the Australia New Zealand Cup, a continental cup, and were therefore quite high level. There were skiers from Germany, Switzerland, Austria, the USA, Slovakia, Norway and Italy. Some of them had competed in World Cups or the Olympics.
Of all the places I have skied this summer, (Les Deux Alpes, Tiffindell SA, Falls Creek AUS, Coronet Peak NZL) Mount Hothamâ€™s snow conditions were the most familiar to me as they reminded me of a Colorado winter. The series consisted of four races- two slalom and two GS. From those races, five BSA athletes scored personal bests and lowered their points. There was one scheduled day where it was too foggy to hold a race, so we had to take a weather day, and leave Australia a day later than expected.
Skiing in Australia was almost as odd as skiing in South Africa. In most other ski resorts, the main divider between two ski runs are pine trees. Occasionally, there are patches of spaced out aspen trees that you can ski through but of course in the winter they have lost all their leaves. In Falls Creek and Hotham, the only trees present were eucalyptus. In some areas they were dense enough to create separate trails like pine trees. But certain in areas where the trees were small and spaced out, you could ski around them and under them, as if it were a wooden obstacle course. Additionally, even though it been winter for months, none of the trees had lost their leaves resulting in a beautiful, if not confusing winter scene.
After ten days of skiing, six races and four travel days we were packed to leave Australia. The next destination would be New Zealand for another series of four races. I am actually in New Zealand now, and will let everyone know how the trip goes soon!
Reece