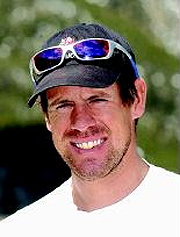 We are delighted to welcome Rob Worrell to the 2017/2018 coaching staff. Rob joins us on a year's sabbatical from the prestigious Ski & Snowboard Club Vail (SSCV).
USSA Alpine coach of the year 2016, Rob was formerly Steamboat Springs Head Coach and US Ski Team Regional Coach before joining SSCV. Rob had the fortune of an SSCV partnership with Ski Gymnasium Stams where he spent over 3 months training in their system, as well as studying the Norwegian system on a fact finding mission in 2014.
Rob is motivated to continue to push GBR athletes to higher levels and to see each athlete reach their full ski racing potential. He says his greatest satisfaction as a coach is seeing maximum progress, and athletes who put their chin in the fall line!
Many thanks to SSCV for the loan of their Mens Alpine Director and U16 Head Coach. And thanks as ever to our sponsors, Artemis Investment Management, whose support continues to bolster the scope and quality of the British Ski Academy programme.
September 2018August 2018July 2018May 2018February 2018January 2018November 2017October 2017September 2017July 2017June 2017May 2017April 2017March 2017February 2017January 2017