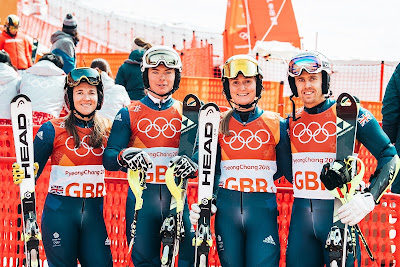 Four plucky former BSA trainees knocked out Team USA in Saturday morning's Olympic Alpine team event, and were then only two tenths off beating the Norwegian team (the eventual bronze medal winners). An inspired performance from Alex Tilley, Laurie Taylor, Charlie Guest and Dave Ryding, who finished in joint fifth place. Putting that alongside Dave's ninth place in the Olympic slalom, only half a second from bronze, and Laurie's 26th place, that's our best Olympic showing in sixteen years.
Back in the day these rockstars logged a total of 150 weeks of ski academy training between the four of them. Dave is a wee bit of a ringer on Team BSA with only a few weeks logged, but hey, we'll take him. We are immensely proud of these athletes and look forward to presenting them with training awards of Â£2500 each when they get home, courtesy of the BSA 2018 Olympic Auction. Many thanks to everyone who supported the fundraiser. You are helping to keep our senior racers on the road and improving opportunities for junior races with an even better ski academy.
September 2018August 2018July 2018May 2018February 2018January 2018November 2017October 2017September 2017July 2017June 2017May 2017April 2017March 2017February 2017January 2017
February 26 2018
Read More